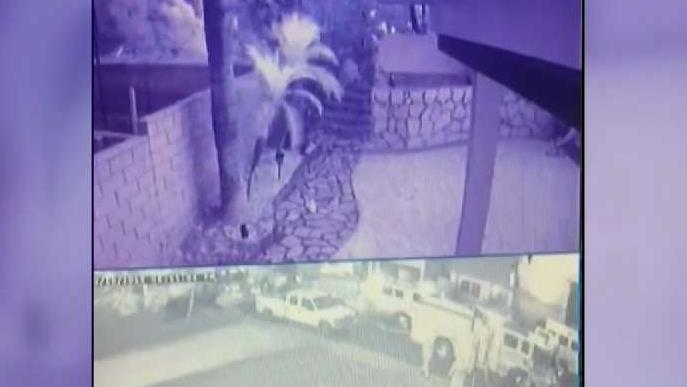 Security camera video shows residents and firefighters, who had been protecting a neighborhood north of Los Angeles from a wildfire, running for cover as dangerous wind-scattered embers and flames exploded near a house.

Robert Delgado, of Sylmar, told NBCLA that he saw flames Thursday night under a high-voltage electrical transmission tower near his home at around the time the fire broke out. Delgado said he had just finished praying when his family saw fire at the bottom of a tower that was about 150 yards from the back of his house.

“It was an overwhelming sight, seeing all this ember, all these flames flying over our heads, over our house,” he said. “It looked like a tunnel of fire.”

The family ran downstairs and into the backyard, grabbing garden hoses in a futile battle against wind-fanned flames and glowing embers. Even firefighters who had just arrived retreated during the initial flare-up

Delgado said the fire moved very quickly and reached the back of his house. Delgado, his wife and their dog were told to evacuate immediately.

They did so in tears, he said, thinking that was the last time they would see their house standing.

“Our house was basically the first house at risk through this whole fire,” Delgado said.

The Delgados went to a family member’s house to wait our the flames.

“We left in tears thinking that our house was burning,” Delgado said. “I didn’t see how they were going to be able to stop this fire.”

It turned out, the unyielding efforts of firefighters had saved the home. A neighbor called Delgado at about 1:30 a.m. Friday to confirm the house was still there.

“It was a huge team effort,” Delgado said. “It’s a miracle that our neighborhood is still here.

“It was just so terrifying. The fire was so fierce.”

Family members have returned home, but thousands of evacuated residents remain out of their house Saturday. Dying winds will likely help as firefighters continue battling flames north of Los Angeles.

Fire officials have not determined a cause of the fire.