All evacuation orders were lifted Monday night after a terrain-driven fire in Pacific Palisades forced residents to flee, with the fire burning dangerously close to homes and sending thick smoke billowing into the air Monday.

The 30-acre fire burning uphill was reported around 11 a.m. in the 500 block of N. Palisades Dr. It was initially a small, one-acre blaze that quickly raced uphill.

Los Angeles County Fire Department’s Sean Rios said crews on the ground were getting a handle on the fire, and winds were not driving the flames, which aided in the firefight.

Mandatory evacuations were ordered for about 200 residents in the area bordered by Charmel Lane on the west, Bienveneda Avenue on the east, the end of Lachman Lane on the north, and Merivale Lane on the south.

Everyone was asked to evacuate calmly, and to notify any neighbors who might not have received the alert.

The Los Angeles County Fire Department also sent water-dropping helicopters to quickly extinguish flames right on the property line of one home in the 1100 block of Vista Grande Dr.

The cause of the fire wasn’t immediately known, but the fire, which started at the base of Palisades Drive, spread to 18 acres in a matter of minutes, fire officials said at a news conference. 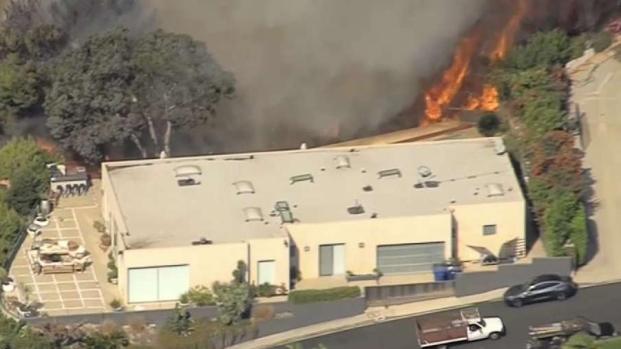 Residents along with construction crews who were working in the area could be seen armed with garden hoses spewing water over the railing toward the embers, alongside fire crews.

All evacuation orders were lifted around 8:17 p.m., the Los Angeles Police Department announced.

While the fire did not burn any homes, it did manage to burn patio furniture of one home.

No residents were hurt, officials said. Officials also said no firefighters had been hurt, but aerial images showed a crew member in an orange jumpsuit lying motionless on the ground before he was loaded onto a stretcher and into an ambulance. He reportedly suffered from heat-related illness, but NBCLA did not independently confirm that.

Officials also noted that because residents overall adhered to strict brush clearance regulations, the fire acreage would likely be downgraded after it had been completely extinguished.

The fire was burning close to the popular Los Liones Canyon Trail, and the smoke plume could be seen from as far away as Los Angeles International Airport.

To read this article in Spanish, visit our sister station Telemundo 52.