Like many residents in his Porter Ranch neighborhood, Gordon Wolf had a sleepless night as he waited to see whether a wind-whipped wildfire to the east would threaten his home north of Los Angeles.

His worst fears were confirmed when he smelled smoke. Then, the police cars showed up on his street.

“It was the smell, and finally a police car came up the street,” Wolf said. “My wife pretty well prepared everything. She had everything packed in suitcases. Bless her heart.”

The Wolfs were among the tens of thousands of residents forced to evacuate overnight when the fast-moving Saddleridge Fire, fanned by powerful winds, spread west from Sylmar and into the Porter Ranch area. Widespread evacuations were ordered for those communities and Granada Hills as the fire continued to burn Friday, fanned by the region’s infamous Santa Ana winds. 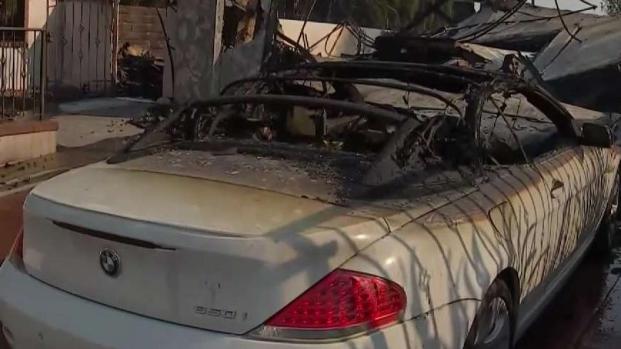 The fire started Thursday around 9 p.m. Some residents had already gone to bed when they were awakened by officers and neighbors urging them to evacuate. Others remained up, vigilantly keeping an eye on flames to the east.

Wolf was among the first to evacuate around 3:30 a.m. At the shelter, he listened for updates on his car’s radio.

What he heard left him filled with uncertainty.

“I’m worried about if I go back up to Porter Ranch we won’t be able to come back down,” Wolf said.

The Granada Hills evacuation shelter when Wolf waited out the fire and others quickly filled up as more people arrived later Friday morning. Some residents were allowed to re-enter neighborhoods, freeing up space for others.

Resident Sandy Laurens returned to her neighborhood in the 12000 block of Darby Avenue early Friday in Porter Ranch. Her home was still standing, but at least one nearby residence was burned to the foundation.

“It’s horrifying to see this house,” said Laurens. “It’s like a skeleton. It still keeps having little embers and smoldering in the garage area.”

A BMW convertible in the home’s driveway was charred. Embers carried by the wind likely sparked fires in the neighborhood.

A cause of the fire has not been determined.

Fall is historically one of the most dangerous times of the year for wildfires in California. Seven of the state’s 10-most destructive wildfires occurred in October — many fueled by monster winds, including Santa Ana gusts. 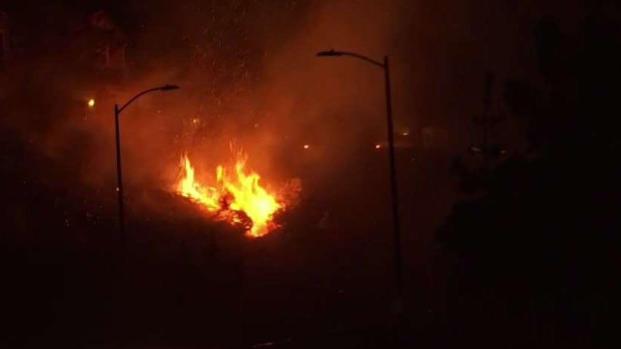 Strong gusts are expected through Friday as firefighters try to protect homes from wind-carried embers.

Until now, Southern California had been spared the large wildfires that devastated the state last year, when the largest, most destructive and deadliest fires on record burned in California. Above-average soil moisture, steady winter rains and high humidity are some of the reasons, along with onshore winds that help keep humidity in place. Without dry brush that acts as fuel, fires can’t spread as quickly.