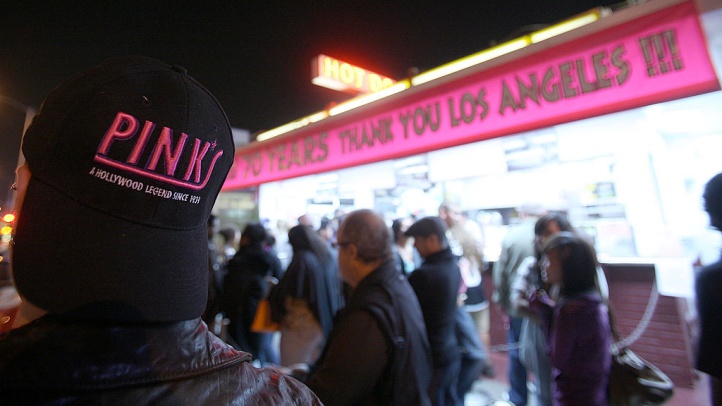 Pink’s Hot Dogs has never been bun, er, one to run from a major celebration.

Rather, the world-famous frankerfurterie of La Brea Avenue goes big, as big as a foot-long dog, in honor of local sports teams, on behalf of beloved celebrities, and when the eatery’s own milestone anniversaries arrive.

And one now has, and it is as auspicious as a chili dog is delicious: Pink’s Hot Dogs is turning 80 years old with, wait for it, eight nights of noshable, super-nice discounts.

How many chili dogs can one customer buy at the window? You guessed it: That number would be eight.

As for the “super-nice” part? All proceeds from all of the 80-cent chili dogs will go to charity.

Various local luminaries will represent each round of 80-minute chili-doggery, and Pink’s will in turn donate that round’s proceeds to the charity the celebrity has selected.

Oh yes, and raise that bun high: All of the proceeds will go to the organization, as in 100%.

Oh yes, and the celebrities have been revealed: Entertainer Jojo Siwa, actor and comedian George Lopez, and the 2020 Rose Queen and her court are on the list.

Will the queues be positively Pink-tastic?

Of course, but like you’d expect anything different from a beloved hot dog stand that can trace its origins to 1939, when it all began “with just a pushcart and a $50 loan.”

Make some friends in line, or at least talk local history with the people in front of you and behind you, because if you’re all chili dog devotees, you likely have a few other things in common, too.

And isn’t Pink’s Hot Dogs one of our most delightful common denominators ’round this big ol’ city?

It’s a filling foodstuff so many of Southern Californians can describe in detail, from the frankfurters’ particular snap to the first hot dog you ever ate there to memories of sitting on the back patio, passing the time while sharing fries with a friend.