A suspected bank robber was found dead inside a Chase bank in Colton after an officer was injured during a suspected attempted robbery Tuesday, police said. An initial report said the officer had been shot in the neck, but the exact circumstance of the injury is still unclear.

Police responded to an attempted robbery at a Chase bank location in the 2000 block of East Washington Street, where a suspected robber shot at an officer three times, according to the police helicopter over the scene.

The officer suffered non-life-threatening injuries, police on the ground said. He was being treated at Loma Linda University Medical Center.

All bank employees were accounted for, with only the suspected armed robber believed to still be inside the bank, police said. 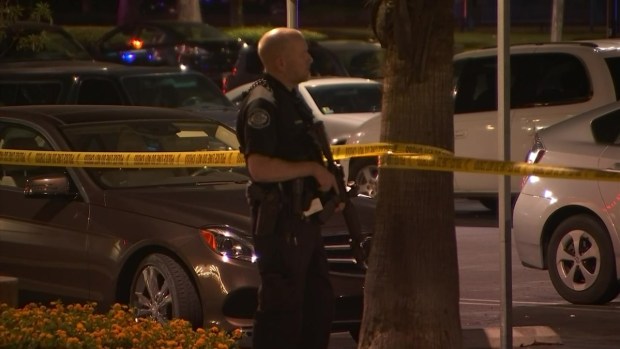 A window at the Chase bank appeared to be damaged and looked like it may have been struck by gunfire. A heavy police presence was visible, surrounding the bank as of 7:25 p.m.

Officers had guns pointed at the entrance of the bank, and police established a barricade to keep the gunman inside.

Families were escorted to safety, and others remained sheltered for more than two hours inside stores.

“We were scared, I have my eight-year-old daughter with me,” Tiana Phipps, a woman who was shopping for groceries at the time, said.

Around 9 p.m., a SWAT team moved into the bank and found a dead man who was believed to be the suspected robber, police said. They added that he most likely killed himself.

In addition, a bag was found inside the bank, and the bomb squad was on the scene investigating the bag.

This is a developing story. Please check back for updates.

Maurice Hill, 36, was arraigned Saturday on multiple counts that also included aggravated assault, assault on law enforcement officers and reckless endangerment. Hill, who is suspected of firing more than 100 rounds during a standoff that gripped the city and the nation, was also denied bail.

Four other men were charged with drug offenses in connection with the standoff; two were trapped in the house along with the gunman and two Philadelphia police officers, the Philadelphia Inquirer reported.

The standoff began in the Nicetown-Tioga neighborhood around 4:30 p.m. Wednesday and ended shortly after midnight Thursday. Two officers and three civilians were safely evacuated before the arrest, having been trapped for hours in the same home as the shooter. Another officer was also injured in a car crash while responding to the standoff.

Despite the heavy gunfire, everyone involved made it out alive.

Hill used an AR-15-style rifle and a handgun during the shooting, said Philadelphia Police Commissioner Richard Ross, who joined in on negotiations with the suspect during the standoff.

“I have to admit, I did not think that this guy was going to come out alive after several conversations with him and hearing a bunch of information throughout the afternoon,” Ross said.

Hill has a criminal record that dates back almost two decades and includes convictions on illegal gun possession. He was first arrested as an 18-year-old in 2001 for illegally possessing a gun with an altered serial number, court records show. He was found guilty on five counts related to that arrest.

In 2002 he was arrested yet again and eventually pleaded guilty to possession of a controlled substance and criminal conspiracy.

Hill would continue to be arrested over the years, with his crimes escalating in severity. In 2008, he was convicted of resisting arrest, criminal trespass and fleeing from police. Three years later, he pleaded guilty to aggravated assault and most recently was found guilty of perjury, in 2013.

Federal court records indicate he was convicted in 2010 of being a felon in possession of a firearm and sentenced to four years and seven months in prison, plus three years of supervised release.

Hill’s criminal record will be even longer after Wednesday’s shootout.

An attempted bank robbery in Glendale Tuesday ended with a man in custody and a bomb-sniffing dog being brought in to check out a bag or backpack that was left behind.

A suspected robber entered the Bank of America in the 3800 block of San Fernando Road about 3:55 p.m. and presented a demand note, according to Tahnee Lightfoot of the Glendale Police Department.

The suspected robber fled the bank and was taken into custody, but he left behind a bag or backpack, so a bomb-sniffing dog was brought in from the Pasadena Police Department to check the item, Lightfoot said.

The FBI also responded to the location. 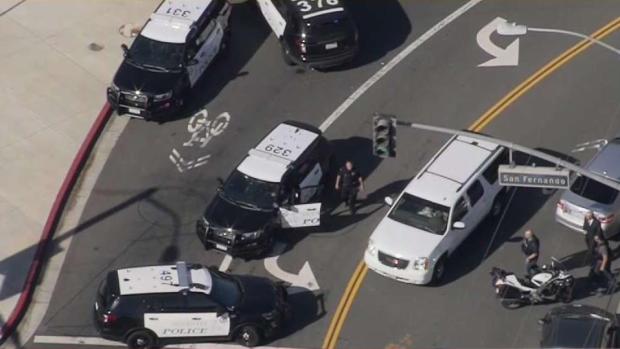 The all-clear was given about 6 p.m. 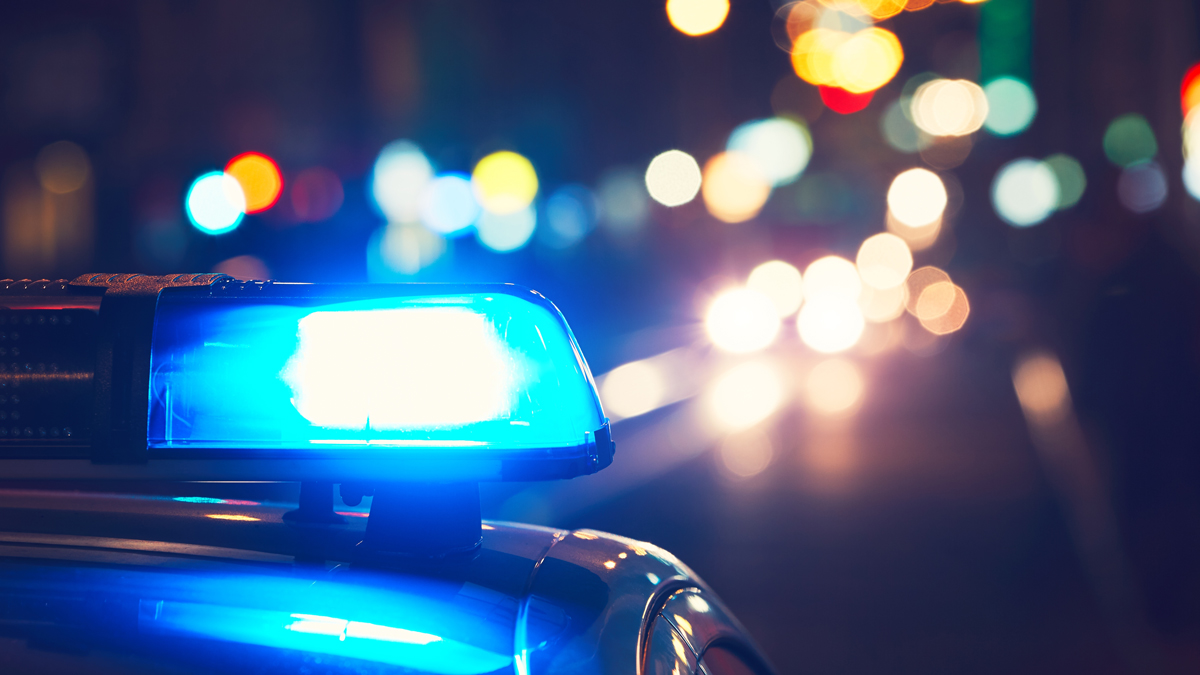 A woman has surrendered after allegedly trying to kidnap a girl in Santa Ana on Friday. 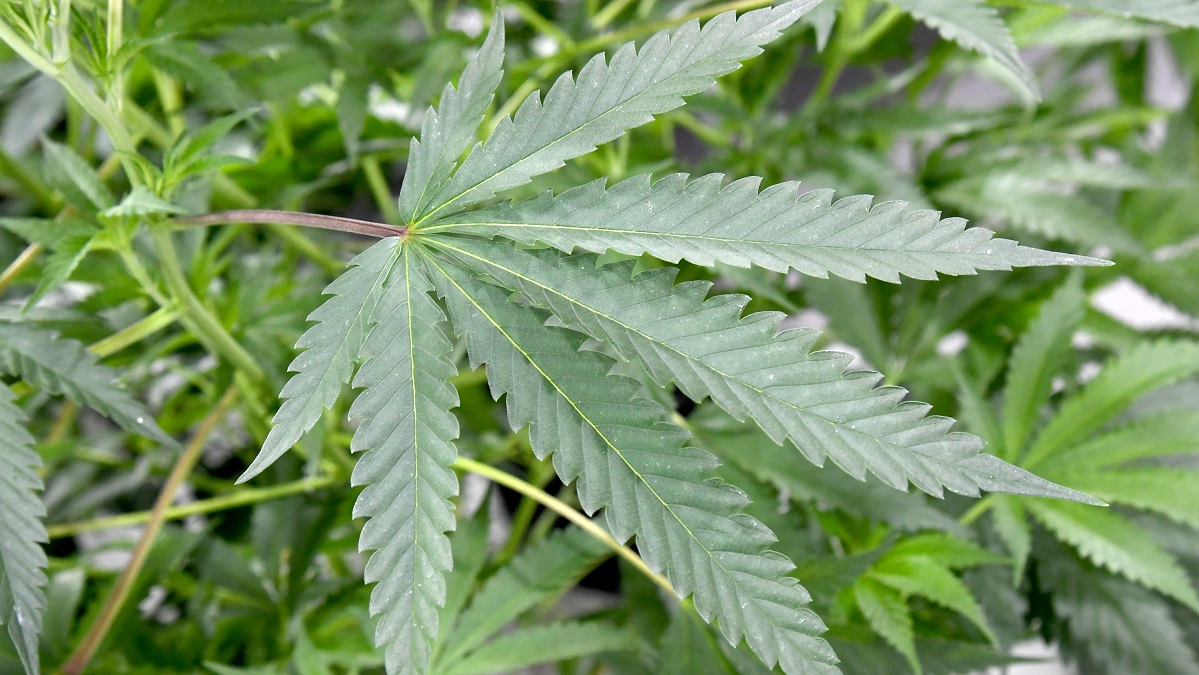 File Photo: Marijuana plants are grown at Essence Vegas’ 54,000-square-foot marijuana cultivation facility on July 6, 2017 in Las Vegas, Nevada. On July 1, Nevada joined seven other states allowing recreational marijuana use and became the first of four states that voted to legalize recreational sales in November’s election to allow dispensaries to sell cannabis for recreational use to anyone over 21. Since July 1, sales of cannabis products in the state have generated more than USD 1 million in tax revenue. (Photo by Ethan Miller/Getty Images)

A marijuana delivery driver was shot during an attempted robbery when he met with a customer Saturday in Pomona, police said.

The location of the incident was not immediately clear, with the shooting occurring around 9:40 p.m., the Pomona Police Department said.

The victim was doing weed deliveries when he met a customer and the customer attempted to rob the driver and shot him, the Pomona Police Department said.

The victim attempted to drive himself but ended up calling the police for help, authorities said.

There was no immediate description of the shooter. 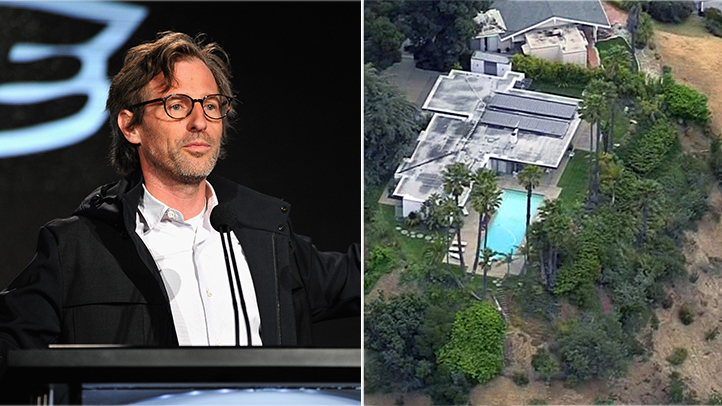 An attempted burglar broke into the home of Academy Award-winning director Spike Jonze Tuesday morning and barricaded himself inside the Los Feliz property for hours before being taken into custody.

The Los Angeles Police Department responded to the home of the famed filmmaker in the 4000 block of Farmouth Drive around 6 a.m. PT.

A suspected burglar got inside the home and was confronted by someone inside the sprawling hilltop property.

It wasn’t immediately clear if the person who confronted the burglar was Jonze, whose birth name is Adam Spiegel.

By 11 a.m., the burglar was taken into custody.

Jonze could be seen outside the home in a camouflage jacket, gray sweats and sandals talking to officers.

No one was hurt, and it was not considered a home invasion, the LAPD said.

Jonze is best known for his work on “Being John Malkovich,” “Her,” “Adaptation,” and more. He is also formerly married to actress and director Sofia Coppola.

The Tennessee father of an 8-month-old child was charged with attempted murder Monday after he was accused of trying to kill the child in a Los Angeles apartment last week.

Michael Freeman, 29, of Nashville, was charged with one count of attempted murder, and child abuse under circumstances or conditions likely to cause great bodily injury or death, according to the Los Angeles County District Attorney’s office.

Just after midnight Thursday, the man grabbed his son, Legend, from the baby’s mother and locked himself in a vacant apartment, the office said.

After officers responded to the vacant apartment in the 800 block of S. Hill Street for the domestic incident, they subdued the man who officers say was allegedly beating the child.

Father Arrested After Attacking, Trying to Drown His Baby 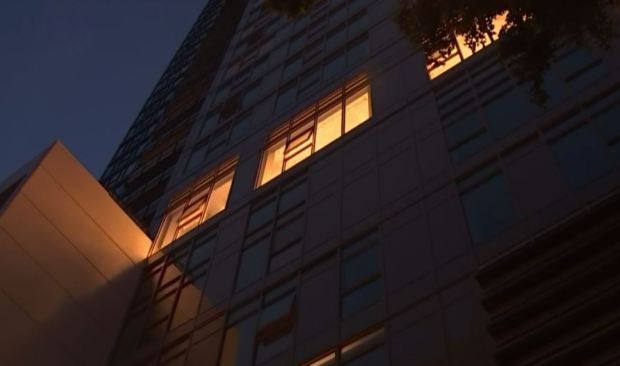 Officers said they saved the child’s life, and he was taken to Los Angeles County USC Medical Center. He was in critical condition Thursday, and no update on his condition was provided Monday.

Freeman’s bail was set at $1 million, though prosecutors recommended he be held without bail.

He faces a maximum sentence of life in prison, if convicted as charged.

A Whittier man who allegedly crashed a stolen car into the front of a fitness center in La Mirada that had reportedly canceled his membership was charged Thursday with five felony counts, including attempted murder.

Sergio Gabriel Reyes, 32, pleaded not guilty Thursday in a Downey courtroom on one count each of attempted murder, assault with a deadly weapon and driving or taking a vehicle without consent and two counts of vandalism with over $400 in damage, according to the Los Angeles County District Attorney’s Office.

The crash occurred about 1:45 a.m. Tuesday at Crunch Fitness, in the 12800 block of Valley View Avenue, according to the Los Angeles County Sheriff’s Department. The gym was open at the time of the crash.

“Witnesses gave chase and followed the suspect to where he was seen enter(ing) the passenger side of an awaiting vehicle,” according to a statement from the sheriff’s department. “The getaway driver then traversed several streets in attempts of losing the witnesses who were in another vehicle giving chase.” 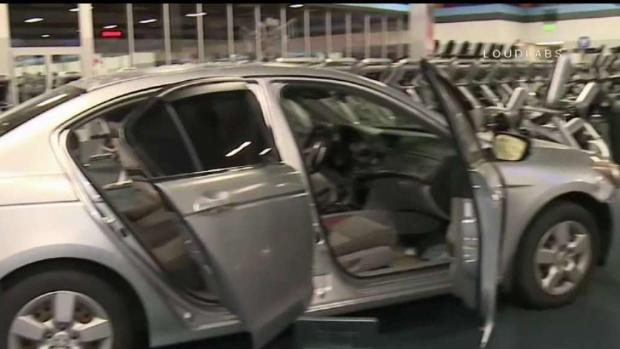 The getaway car crashed at Alicante and Manzanares roads in La Mirada, and the driver got out and escaped on foot.

The passenger in the getaway vehicle — who allegedly had crashed the stolen car into the gym — was identified as Reyes. He was arrested shortly after 3 a.m. Tuesday and has remained jailed since then in lieu of $1 million bail, according to jail records.

The car that had crashed through the fitness club had been stolen in Whittier a few days earlier, authorities said. The getaway car in which Reyes was riding was registered to him, the sheriff’s department reported.

“It appears that suspect Reyes was a disgruntled former member of the fitness club,” the sheriff’s statement said.

Workers at the gym told NBC4 that Reyes’ membership had been canceled after complaints that he was allegedly harassing women. They also said he was trying to get his $70 enrollment fee back and allegedly threatened to fight an employee. 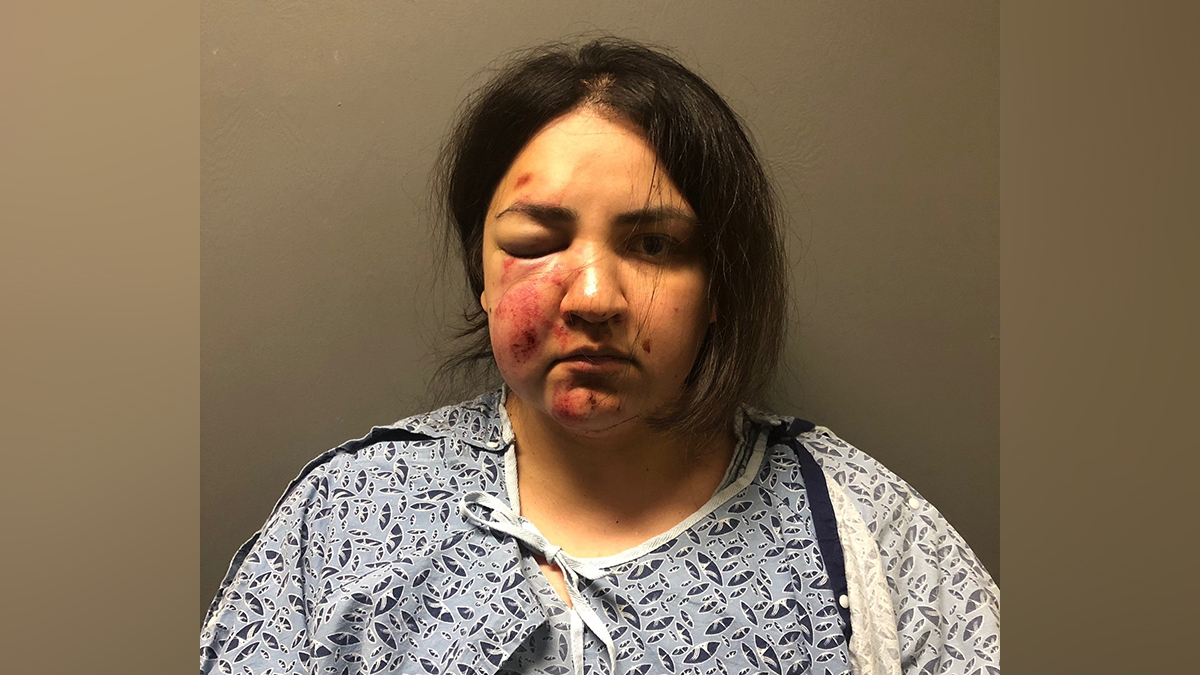 Upland Mother Tierra Rose Ortega is expected to be arraigned Friday on two criminal counts stemming from the death of her infant daughter, and the serious injury suffered by her toddler son when he was thrown to the ground from a second floor.

The first count alleges Ortega committed the assault that led to the death of daughter Ezlynn, 7 months old, who was found in the family apartment with a fractured skull.

There is no murder charge, but the second count alleges “willful, deliberate, and premeditated attempted murder” against her son, who was previously identified by authorities as Jerricho, 19 months old. He suffered a broken foot and other injuries, but is expected to recover.

Nothing in the filing gives any indication what may have led to the violence.

Authorities responded to the apartment complex on Wedgewood Avenue on Tuesday in response to a 911 call from a neighbor who saw the boy thrown off an outdoor upstairs hallway.

As officers entered the courtyard, the woman threw herself down, police said. Officers went into the apartment and found the daughter with mortal injuries.

Ortega’s husband was away at work, police said. On being notified, he returned home, clearly distraught.

Tierra Ortega, 24, was initially hospitalized with injuries to her face. After treatment, she was arrested and booked, and remains jailed on a no bail hold in the West Valley Detention Center in Rancho Cucamonga.

She has spoken with investigators, according to Police Capt. Marcelo Blanco, who declined to go into what she said.

It was anticipated Ortega would be arraigned shortly after the San Bernardino County District Attorney filed the criminal complaint Thursday morning, but Ortega was not brought to the courthouse and the arraignment was instead scheduled for Friday.

Boilerplate language in a notice after the first count indicated that “a suspected child abuse report (SCAR) may have been generated in this case.”

But San Bernardino County Children and Family Services has had “no prior involvement with the (Ortega) family” and the child who died, Human Services Communications Officer C.L. Lopez stated in response to an inquiry.