Doe, 24, who was mis-gendered in initial reports, was found dead Sunday in a car parked in a driveway in Allendale County, according to the Post and Courier.

Authorities said they would not immediately release any more details, such as how she was killed.

“We are sounding the alarm — we are in an absolute state of emergency for black transgender women,” said Chase Glenn, executive director of South Carolina LGBTQ group the Alliance For Full Acceptance. “We are at a crisis point that demands the nation’s attention. 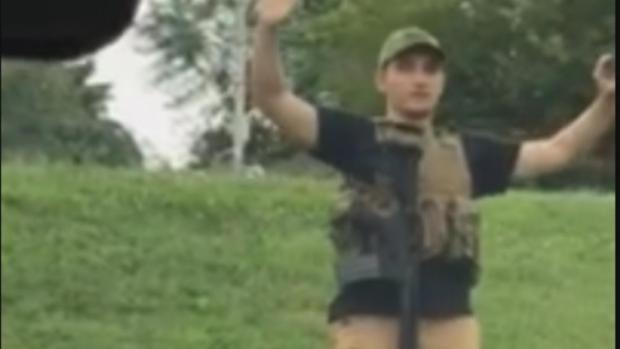 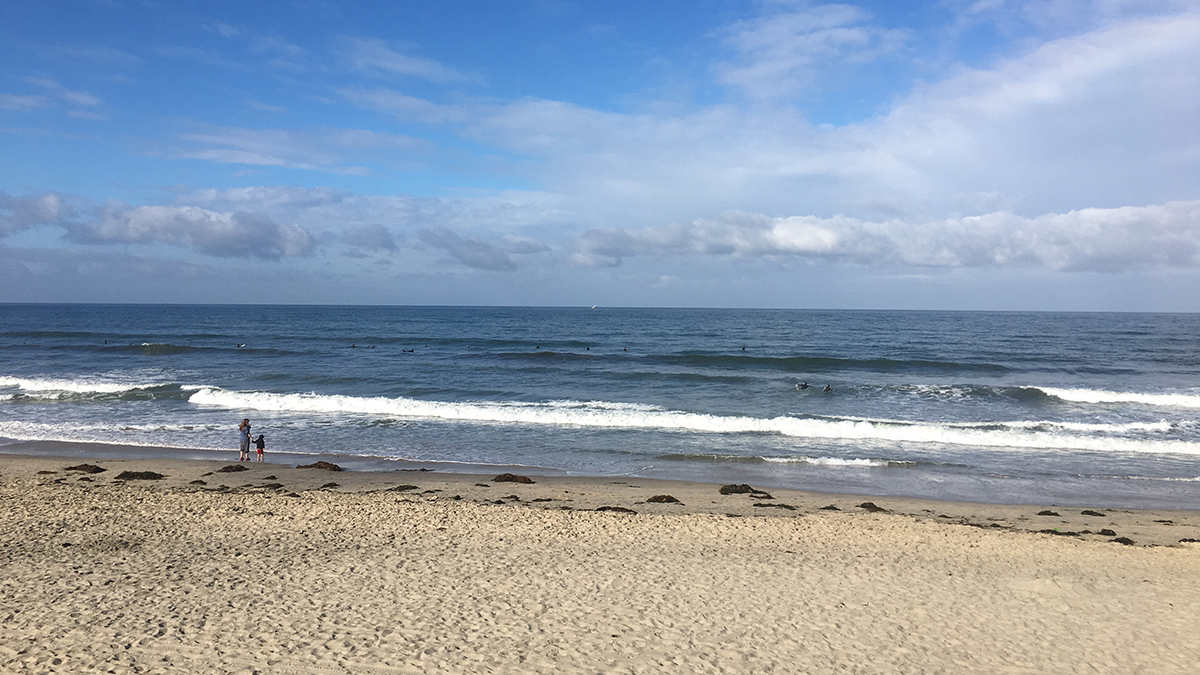 One person was killed and two others were injured when a cliff collapsed in Encinitas Friday afternoon, the sheriff’s department confirmed.

San Diego County Sheriff’s Department Lt. Greenwald said deputies were called to the 1700 block of Neptune Avenue at around 3 p.m. to help victims trapped in the collapse.

First responders, including lifeguards, rushed to dig the victims out from the rubble and debris.

Three people were killed, including a 6-year-old boy, and 12 others were wounded Sunday after a gunman cut through a fence to avoid security and opened fire at the Gilroy Garlic Festival in Gilroy, California.

The other two people killed in the shooting have been identified as a 13-year-old girl and a man in his 20s, police said.

The gunman, who was shot and killed by police, has been identified as Santino William Legan, a federal law enforcement official confirmed to NBC News. Police in a news conference Monday said the gunman used an AK-47 type assault rifle purchased legally in Nevada on July 9.

“This is a tragic incident for our community,” Gilroy Mayor Roland Velasco said. “On behalf of the city and the Gilroy City Council our thoughts and prayers go out the victims and families.” 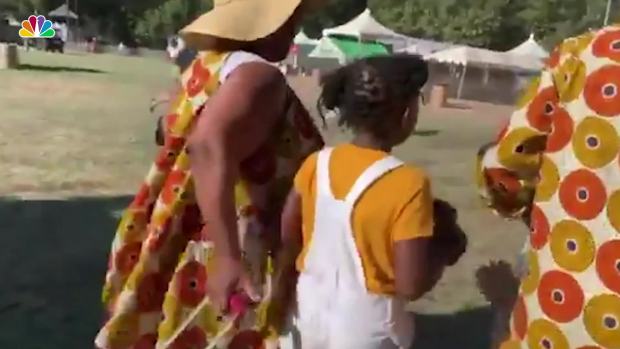 There were reports that a second suspect may have been involved in the shooting. Police are still trying to determine if that is the case.

“We don’t have any confirmation that any second suspect did any shooting, but we certainly are investigating all leads to try to determine who that potential second suspect is and what exactly that person’s role was,” Gilroy Police Chief Scot Smithee said Monday.

A motive behind the shooting remains unknown, Smithee said.

The 6-year-old boy who died was identified as Steven Romero by members of his family.

“My son had his whole life to live and he was only 6,” his father Alberto Romero told NBC Bay Area. “That’s all I can say.”

Police and emergency personnel responded to reports of an active shooter incident at Gilroy’s Christmas Hill Park at around 5:40 p.m. PT, Smithee said. Officers engaged the suspect and killed him within a minute.

Witnesses reported seeing a potential second suspect, and as of early Monday morning the scene was still active, with multiple agencies searching for the possible outstanding suspect, according to Gilroy police. 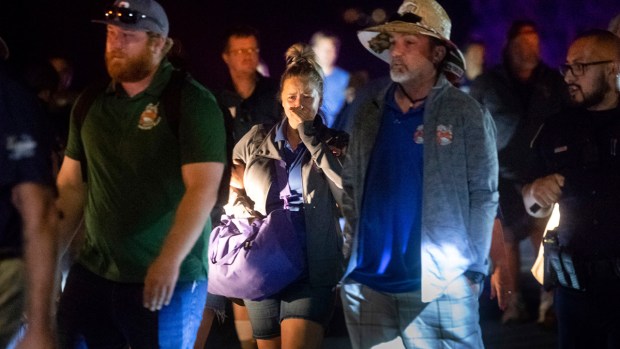 Late Sunday, officials said 15 people were injured in the shooting. They later clarified to say 12 people were hurt.

St. Louise initially received six gunshot wound victims, and of the four that remained there, one died, a hospital spokesperson said.

An official with Regional Medical Center in San Jose said the hospital received four victims, one of whom was in critical condition.

‘He Was Ready to Do Some Damage’: Witness Describes Gilroy, Calif. Shooting 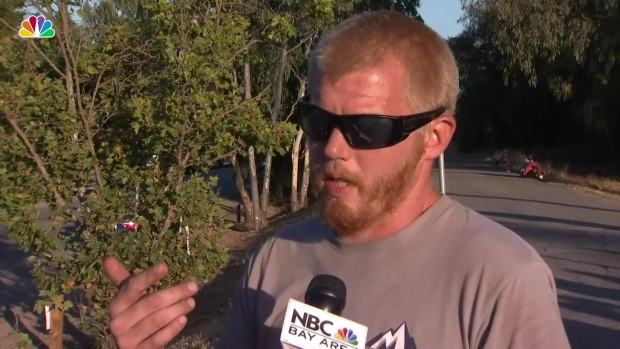 One witness told NBC Bay Area he was on his way out of the festival when he felt a bullet pass by his head, and when he turned around, he saw everyone running.

Another witness said some people were stranded at nearby Las Animas Elementary School.

San Jose police and fire units responded to the scene to assist, according to a tweet from Mayor Sam Liccardo. Santa Clara County Sheriff’s deputies also were on scene, along with California Highway Patrol units.

For those searching for loved ones, a reunification center was set up at nearby Gavilan College in parking lot B, according to Gilroy police.

Attorney General William Barr was also briefed on the shooting, and the Justice Department is providing resources and monitoring the situation, a department spokesperson said early Monday.

The festival, now in its 41st year, is a local tradition that attracts thousands annually. It was wrapping up its third and final day when reports of the shooting came in.

This is scene right now in what police call the hot zone. Still searching for active shooter at Gilroy Garlic Festival . Reports of up to 11 people injured. Investigating whether there were 2 shooters pic.twitter.com/C4NQnBzrfg

#Gilroy shooting:
If you are looking for a loved one, please go to the reunification center at Gavilan College at parking lot B. https://t.co/aB9S3wXKGB 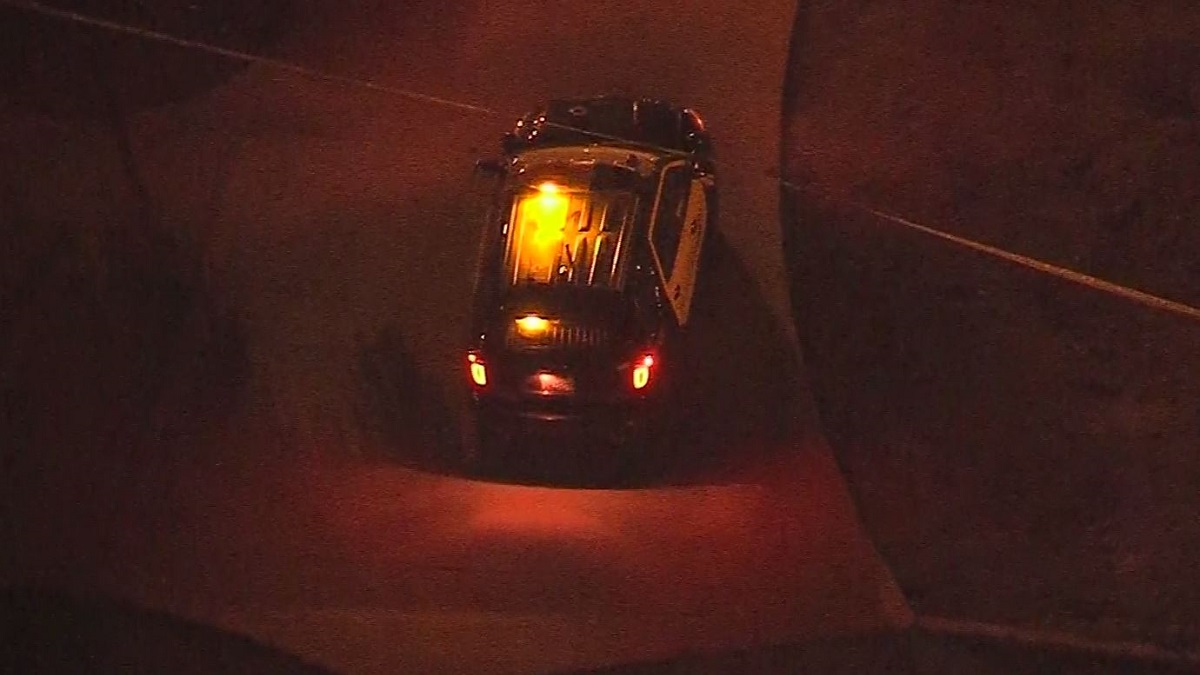 One man was fatally shot and another man was shot and wounded in a park in West Hills Wednesday, police said.

The shooting occurred in Shadow Ranch Park in the 22600 block of Vanowen Street around 8:45 p.m., the Los Angeles Police Department said.

Newschopper4 Alpha flew over the park at approximately 9:30 p.m. and could see a body face down in the park.

No description of the shooter or shooters was immediately available, and the second shooting victim’s condition was not immediately clear.

Four people were killed in a traffic collision on the (710) Freeway in South Gate.

The crash was reported at 3:15 a.m. shortly after two vehicles were seen racing on the 710 Freeway at Firestone Boulevard.

According to California Highway Patrol Officer Kimball, one vehicle ran into a poll and caught on fire while another one crashed into a wall on the right shoulder of the freeway.

As of 4:12 a.m., lanes two, three and four will be blocked for unknown duration.

This is a developing story. Check back for updates. 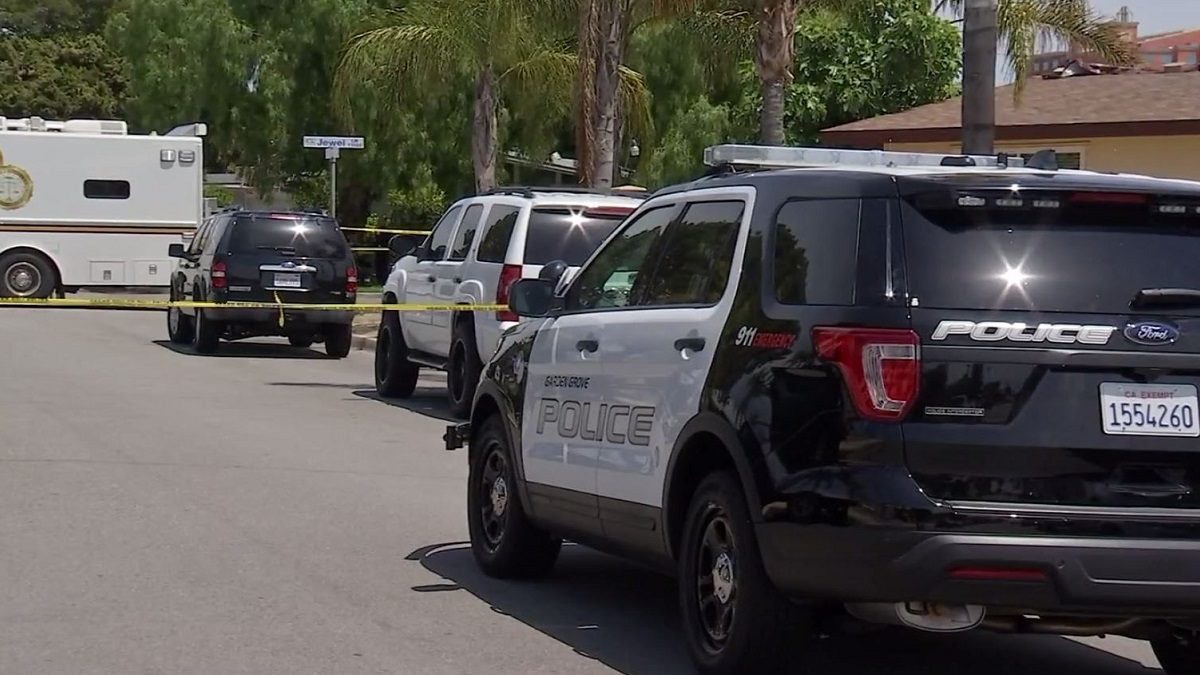 A 20-year-old man, allegedly armed with a knife and who allegedly stabbed an 18-year-old woman, was shot several times and killed by officers in Garden Grove early Saturday morning, police said.

The incident occurred in the 12100 block of Wilken Way at 1:59 a.m., the Garden Grove Police Department said.

The 20-year-old suspect was identified as Andrew Giovanni Meza of Garden Grove by the GGPD. The 18-year-old victim’s name was being withheld, but police said she had been taken to a local hospital and was in stable condition.

Officers arriving at the scene were advised that the suspect was suicidal, armed with a knife and had just killed someone, police said. As officers approached the home, they opened fire on the suspect, the GGPD said. Police said a knife was recovered.

The Orange County District Attorney’s Office is leading the investigation, with the assistance of the Garden Grove Police Department Crimes Against Persons Unit, into the incident, the GGPD said.

Police are investigating an early morning shooting in which a 57-year-old woman from Ontario was killed and five other people were wounded outside a bar in Long Beach.

The victims were transported to a local hospital, one of the wounded victims was said to be in critical but stable condition.

The location is at PCH and Canal Avenue, a few blocks west of the 710 Freeway.

The woman was pronounced dead at the scene, Yap said. She was a 57-year-old grandmother and mother of two from Ontario, according to multiple media reports.

The shooting reportedly occurred in a parking lot.

Police have not released any further information. 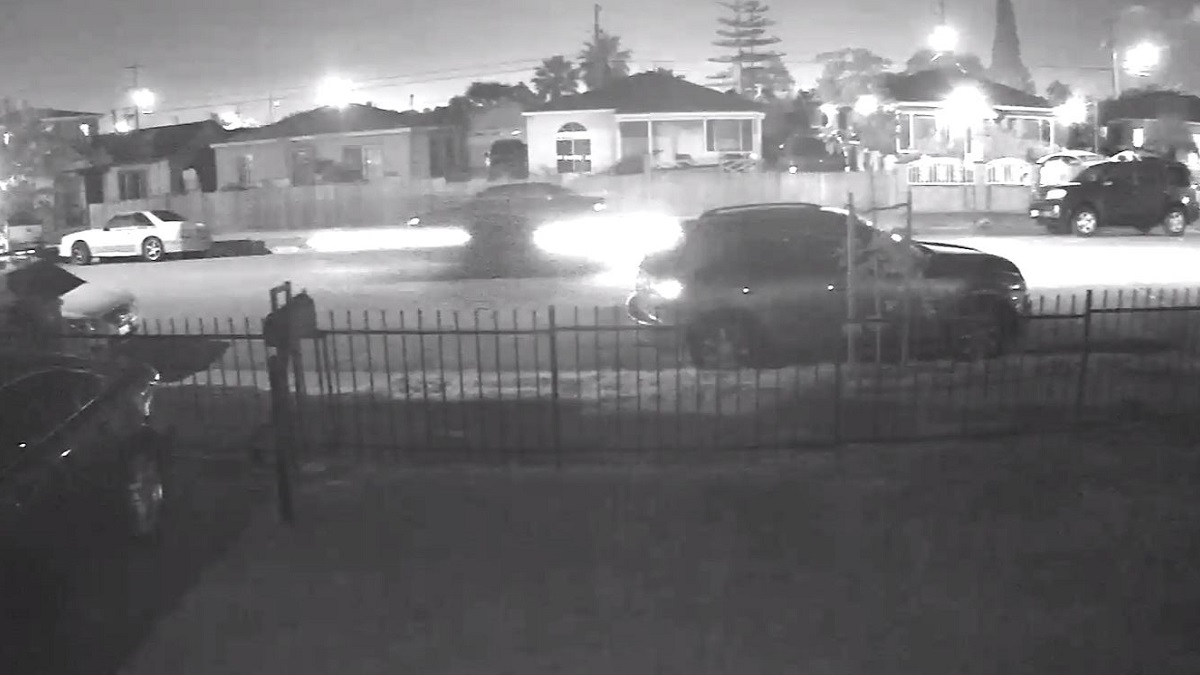 An unidentified woman was killed and another man was injured in a possible case of street racing caught on surveillance video in Willowbrook Saturday night.

Neighbors told NBC4 that the intersection is dangerous and the deadly crash, they say, proved their point. Following the crash, flowers can be seen to pay respects to the unidentified young woman who lost her life.

“I tried to help,” Fabiola Rodriquez, a neighbor said.

Rodriguez was celebrating Mother’s Day Saturday night with her family when they heard the crash. The crash was so loud that many neighbors ran outside to help. They say the suspected hit-and-run driver was westbound on 131st Street when the SUV struck and mangled a Toyota Camry on Towne Avenue.

Surveillance video captured what is believed to be the deadly moment of impact.

Randy Jackson, another neighbor, said, “The side impact was so severe, nobody could get her out. We couldn’t get her out.”

That woman died soon after, and her passenger was injured and rushed to the hospital.

“All I was able to see was when they pulled the guy out and into the street and laid him out and fixed him up, and that’s when they put him on the gurney and took off with him to the hospital,” Anna Ramirez, witness said.

The California Highway Patrol says the hit-and-run driver’s vehicle is an Infinity SUV. The driver, along with and possibly one other person, got out of the SUV and left the scene.

“It’s horrible, especially for the family of that young lady,” Rodriguez said. “Instead of them celebrating, they’re in pain.”

Investigators are expected to release more information on the deadly hit-and-run crash. The coroner has not yet identified the woman killed in the crash.