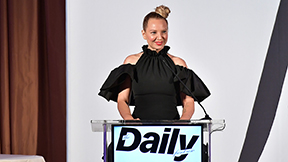 Singer Sia revealed in a Twitter post on Friday that she suffers from chronic pain and a neurological disease, NBC News reports.

“I just wanted to say to those of you suffering from pain, whether physical or emotional, I love you, keep going,” the “Cheap Thrills” songstress wrote in a post.

According to the Mayo Clinic, the syndrome is a group of inherited disorders that affects connective tissues, and symptoms typically include flexible joints and stretchy, fragile skin. People tend to suffer from joint pain and dislocations, according to the clinic’s website.

In severe cases, the disorder can cause the walls of the person’s blood vessels, intestines or uterus to rupture.

Jimmy Fallon talks about the time he invited his parents to meet his future in-laws at their family summer home, and they immediately began embarrassing him with their antics before they even arrived.

You’d never dare fly your X-Wing in the vicinity of the Death Star without knowing first where its reactor core is, as well as the exact location of the thermal exhaust port that leads to it.

Likewise, you wouldn’t enter a new 14-acre land, one inspired by the “Star Wars” universe, without first snagging a guidemap, a portable atlas that can tell you where to find Oga’s Cantina, Millennium Falcon: Smuggler’s Run, and the other fantastical features found within.

And guidemap-wielding fans are about to enter that cosmic place, starting on Friday, May 31 when Star Wars: Galaxy’s Edge debuts at The Happiest Place on Earth.

Disneyland Resort shared a first look at its newest guidemaps, which now include Galaxy’s Edge, on the official Disneyland blog on Friday, May 24.

Cue the Wookiee howls of delight.

The guidemap also includes a venue listing for Galaxy’s Edge, giving a clear rundown of what each place does, serves, and offers.

Guidemaps and Disneyland are a tight twosome, a pairing that’s as traditional as staying for the fireworks right after the parade. Or Mickey and Minnie. Or a Dole Whip float and a tiny umbrella.

The park’s seasonally changing guidemaps are regularly collected, too, by avid Disney collectors, or kept as treasured souvenirs in scrapbooks, shoeboxes, and frames.

So the notion that Galaxy’s Edge will star on the cover of the info-packed pamphlet as it makes its highly anticipated debut is as understandable as Yoda is wise.

Explore away, no Landspeeder required.

An important note: Reservations are required to enter Galaxy’s Edge from May 31 through June 23 (as well as a ticket to Disneyland).

Those are now booked up, but you can still reserve a Disneyland Resort hotel room and enjoy a Galaxy’s Edge “designated reservation” as a complement to your stay. Details may be found here.

Oahu’s Kailua Beach Park in Hawaii has been selected as the best stretch of sand for Dr. Beach’s Top 10 Beaches list in 2019. Two other Hawaiian beaches, Duke Kahanamoku Beach in Oahu and Hapuna Beach State Park on the Big Island, also made the list.

Florida had two entries and North Carolina, South Carolina, California, New York, Massachusetts each had one on the annual list that ranks major public recreational beaches in the coastal U.S. states.

Florida International University professor Stephen Leatherman, also known as Dr. Beach, uses about 50 criteria to assess and rank beaches across the country. U.S. territories like Puerto Rico and the Virgin Islands aren’t included in the rankings. In recent years, he has given extra points to beaches that prohibit smoking, saying cigarette butts are not only environmentally damaging, but can ruin the experience for beach-goers. Safety and environmental management are other major factors, he said